There’s no philosophy in his work. He cooks what he enjoys. And what regular guests at the restaurant in the castle ask for.

Jagodic cooks in one of the most aristocratic places in Ljubljana. But the old castle is not the reason for original dishes that result from his training with the most renowned masters of Slovenian and global cuisine, and his everyday contact with local suppliers of ingredients. Since the latter is one of the key elements when creating dishes, he visits the city marketplace at the foot of the castle hill every day. He finds inspiration when talking to suppliers and while tasting and smelling their produce, particularly seasonal vegetables.

A classic among traditional dishes that are rarely on menus.

Cauliflower in all forms

He loves seasonal vegetables because they challenge and inspire him.

Jagodic’s particularity is that he uses only one type of vegetable for a particular dish, but prepares it in different ways. He serves pumpkin, beetroot and asparagus for dessert. “When preparing menus, my biggest concern is what seasonal vegetable suits best. I thought about using carrot for a whole week. It’s really a great challenge to prepare a dish that will excite the guests. It requires a lot of effort, consideration, deep thinking. I enjoy such a challenge,” says Jagodic. Once he minutely perfects a dish, he doesn’t change it anymore. Some dishes, such as roasted and marinated beef, doe in venison sauce with bacon or cauliflower prepared in three different ways with mayonnaise and truffles, are true hits and have been on his menu for several seasons. “Why would I take them off the menu if the guests want and praise them? I can’t improve them any further, I’d only spoil them with changes.” 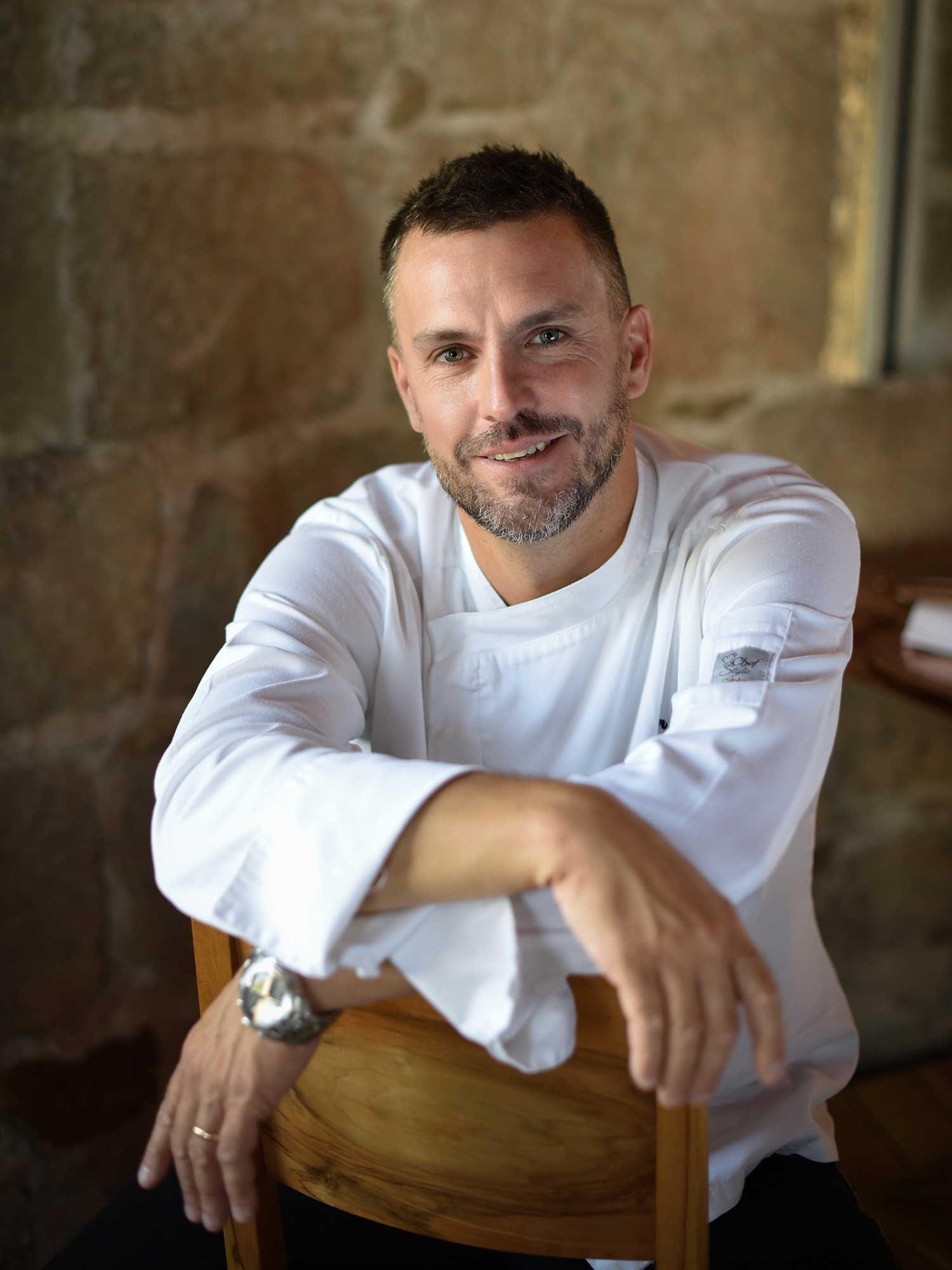 I don’t have a special story about why I’m a cook. I wanted to do this as a child and it’s still my dream job.

Jagodic lives for cuisine and his guests: “This is a way of life, not a job. I know that while I’m moving, trending and working well, there’ll be no rest.” He is also appreciated in Slovenia because he selflessly distributes his knowledge. He teaches at the Ljubljana Secondary School of Gastronomy and Tourism and regularly welcomes young people into his kitchen. “I’ve always enjoyed working with them. It’s a pleasure and challenge to teach young people and contribute to their knowledge and experience. If they’re ambitious, they move on; it’s normal that they don’t stay in Slovenia forever. All their successes bring me exceptional satisfaction.” 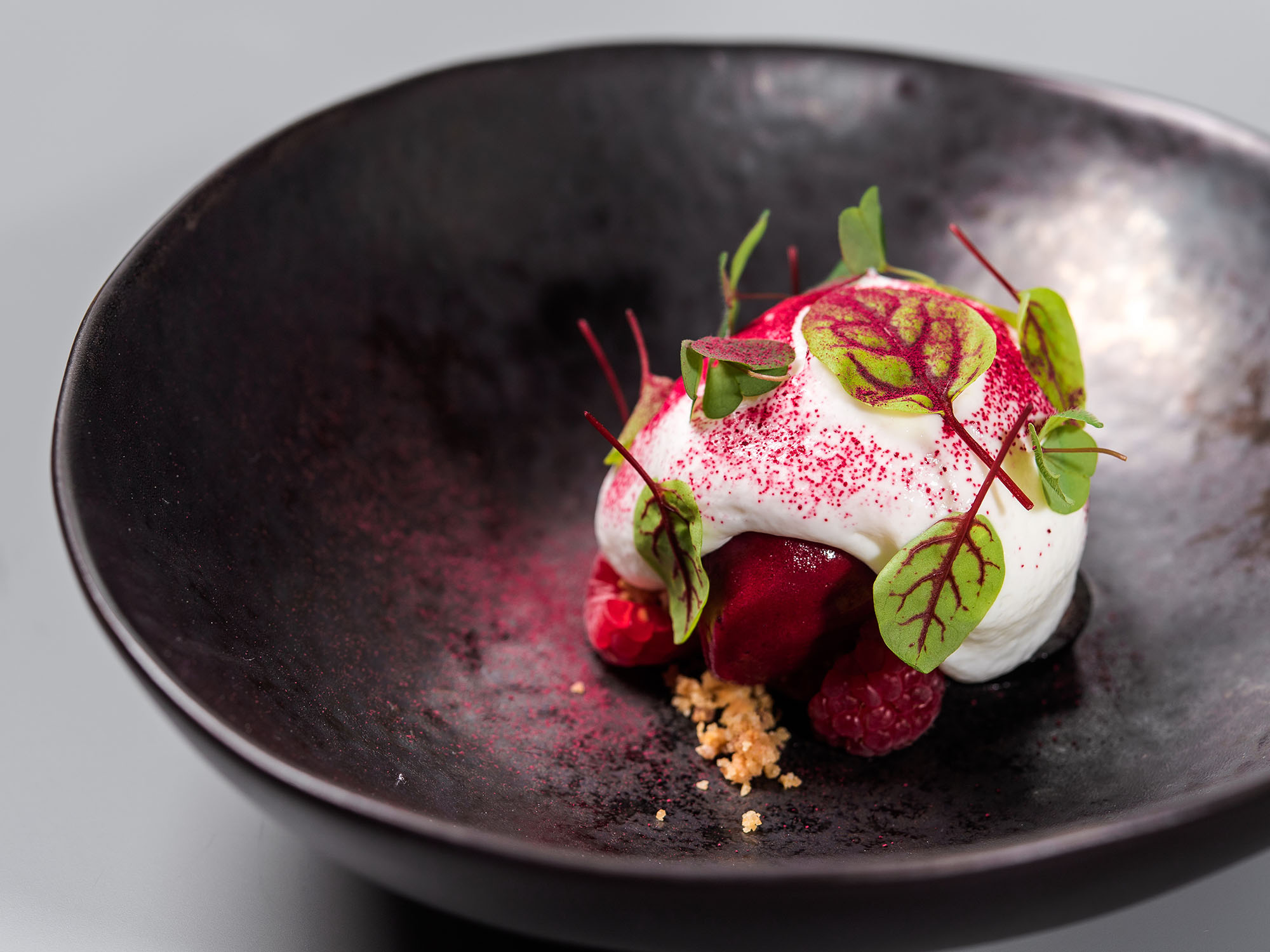 He had no contacts. Yet he sent his request. And Noma responded first

After completing secondary and higher vocational schools, Jagodic found a job at the protocol service of Brdo pri Kranju, where Andrej Goljat, a unique legend of Slovenian cuisine, monitored his work. In his long career, Goljat mentored many chefs, wrote books and held workshops about traditional Slovenian dishes. Due to his hard work and talent, Jagodic became the head of the kitchen at Hotel Astoria Bled and later at Grand Hotel Toplice and Vila Bled in his early twenties. But he doesn’t like to brag: “I prefer to let the plates do the talking.” Between 2006 and 2010, he was a member of the Slovenian national culinary team that won two silver medals at the 2008 Culinary Olympics in Erfurt.

Jagodic travelled and obtained knowledge, which he wanted to upgrade further with the experience of working with great chefs of haute cuisine and Michelin stars. He first attended the famous school of Alain Ducasse in Paris, and then sent a request for internship to top restaurants around Europe. The first to respond was Noma, where he was enthused about the philosophy of preparing new dishes, searching for ingredients and the organisation of work under chef René Redzepi. The best experience was working with chef Nils Henkel in the now closed Gourmetrestaurant Lerbach, which had three Michelin stars and the kitchen was accordingly demanding. “I liked it very much. The basics were rather classic, but they incorporated trends. They immediately took me in as a member of the team and we sat with the chef after work in the office and talked about the day,” remembers Jagodic who came to the newly open Strelec Restaurant in 2012 and built its reputation as one of the best in Slovenia.

His principle of work is based on classic French cuisine and verified and tested recipes involving ingredients of local origin. In addition to studied balanced flavours, the aesthetics of original dishes is important to him, but he emphasises that “only what contributes to the flavour is on the plate, and not what contributes to its visual appeal.” For his work, Jagodic received the title of Gault & Millau Chef of the Year 2019. He participates at various culinary workshops and experiential dinners. In the summer, Jagodic also cooks on a tourist boat sailing on the Ljubljanica River in the centre of the Slovenian capital. 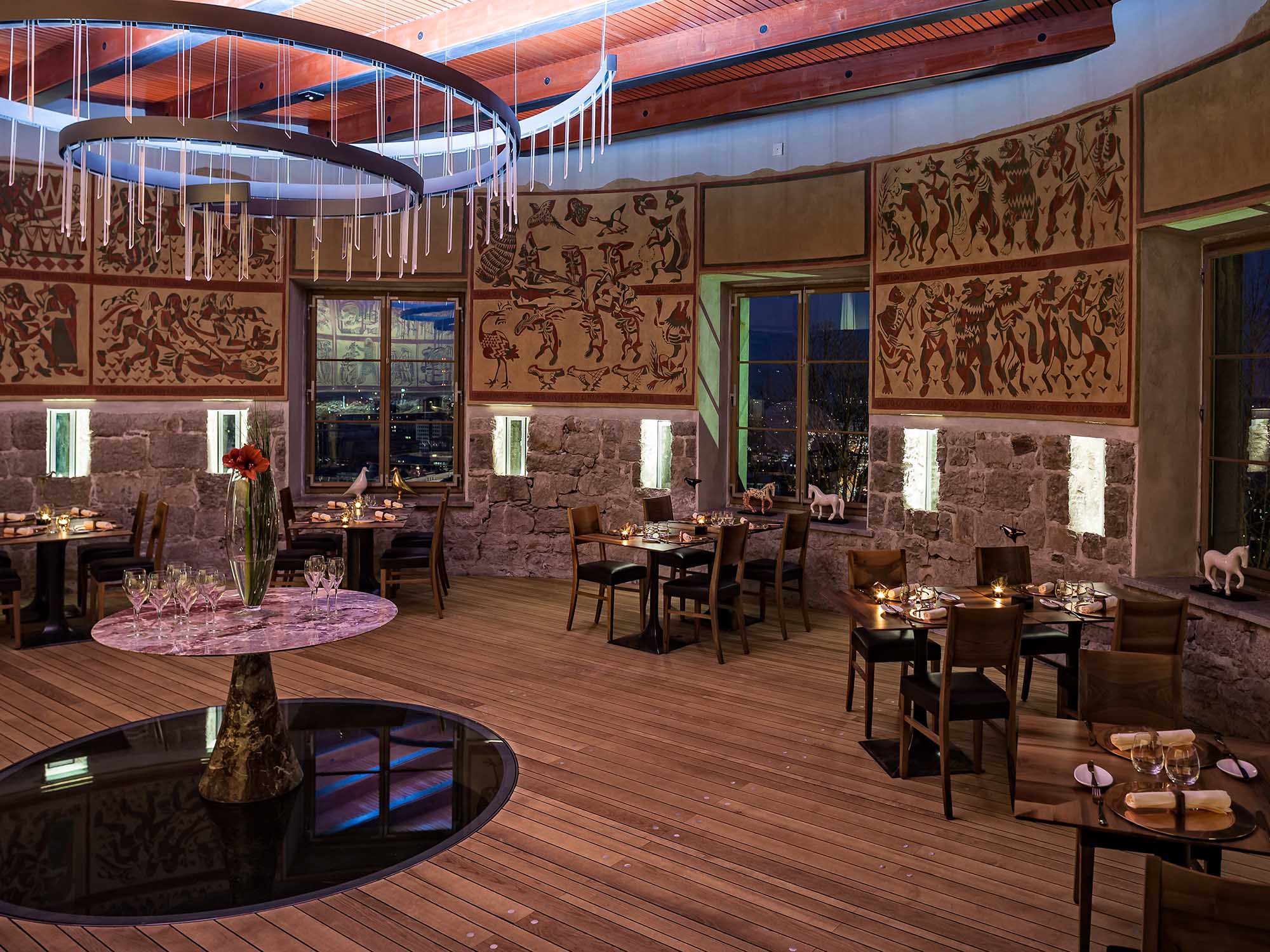 Haute cuisine with the most wonderful view of Ljubljana. 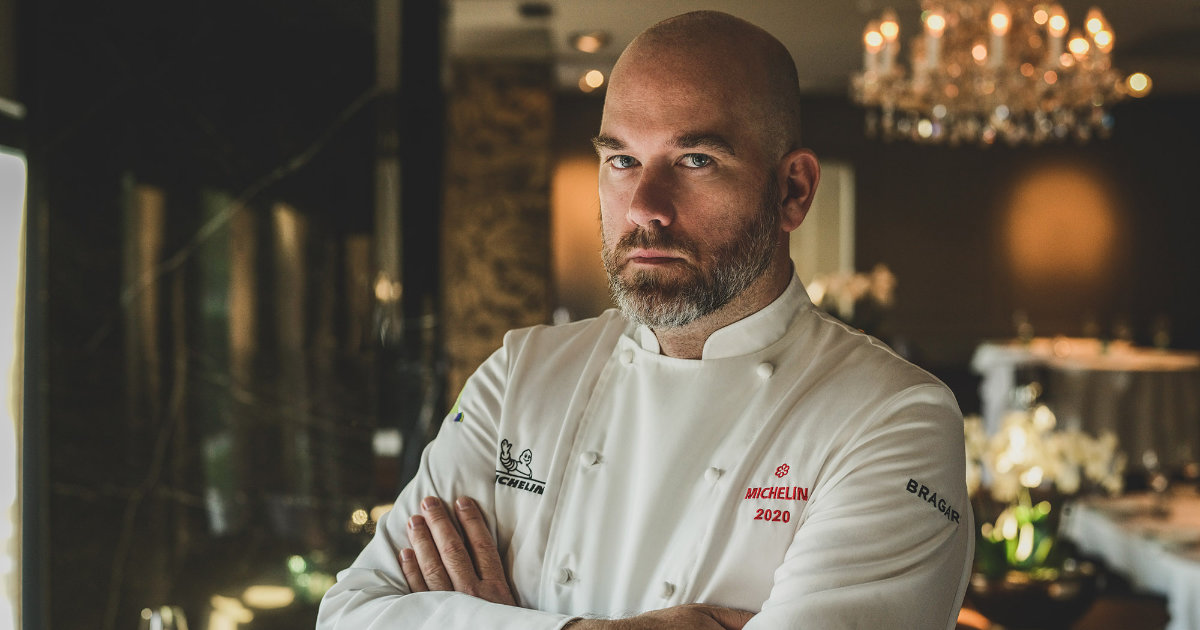 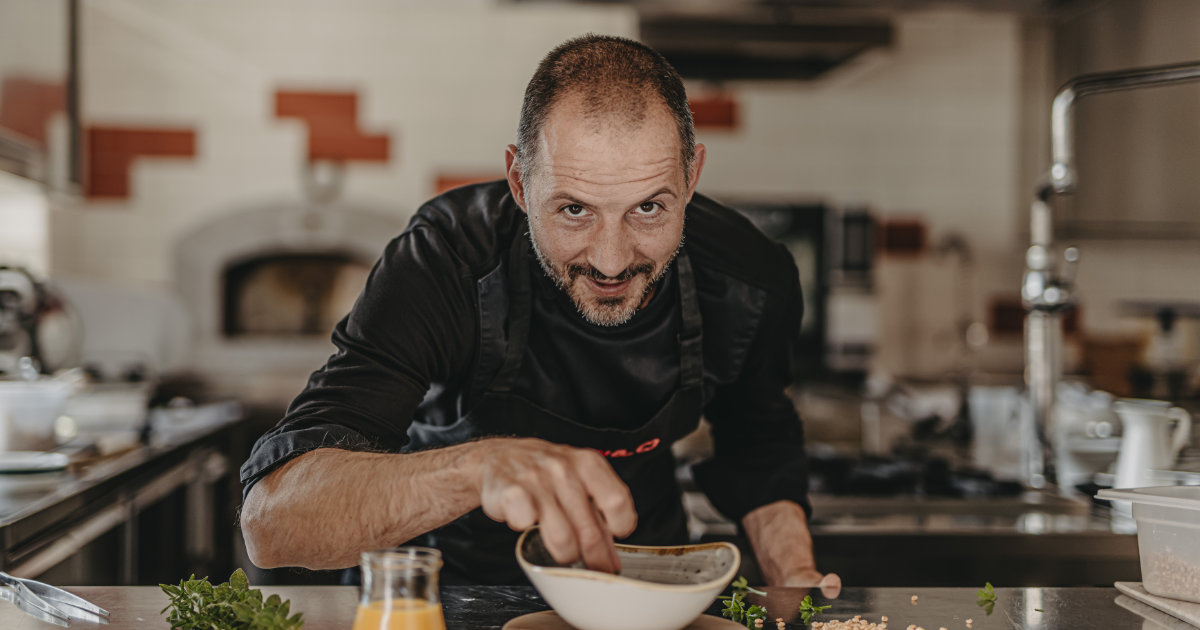 A lover of Mediterranean cuisine that is successfully combined with genuine local products from the Karst. 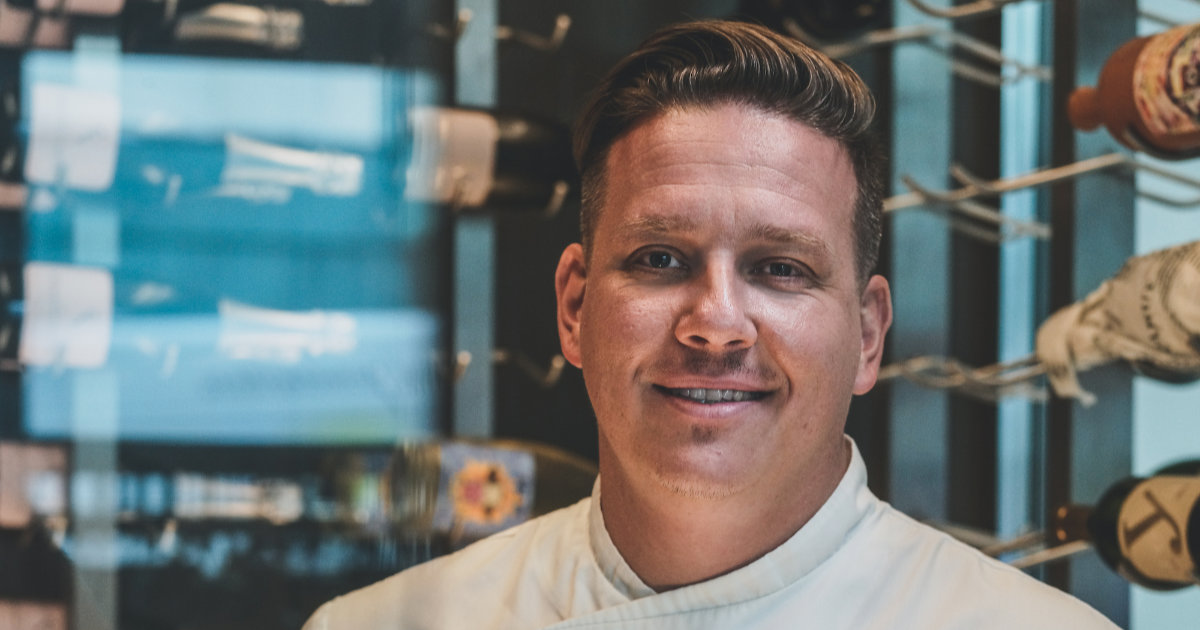 A culinary traveller who combines techniques from around the world with the flavours of Slovenian ingredients.