“Don’t be surprised. When Columbus went to America, we were already doing business,” explains David Lesar in his ultra-modern cellar which rather than a maturing room for Ribnica sausages is reminiscent of the secret headquarters of an elite military squad with its dim natural light brought into the room with special lenses.

Lesar is leaning over a glass table made from an old barrel with the year 1492 engraved into it, the year when Emperor Frederick III gave the people of Ribnica, as the first true craftsmen in our region, a pedlar patent, which allowed them to sell their products, such as dormouse fat and skin, and of course, woodenware, from riddles to spoons, all over the Austro-Hungarian Empire free of tax. “People were eating with their hands before the Ribnica men showed up,” explains the man who faithfully follows the entrepreneurship of his ancestors. 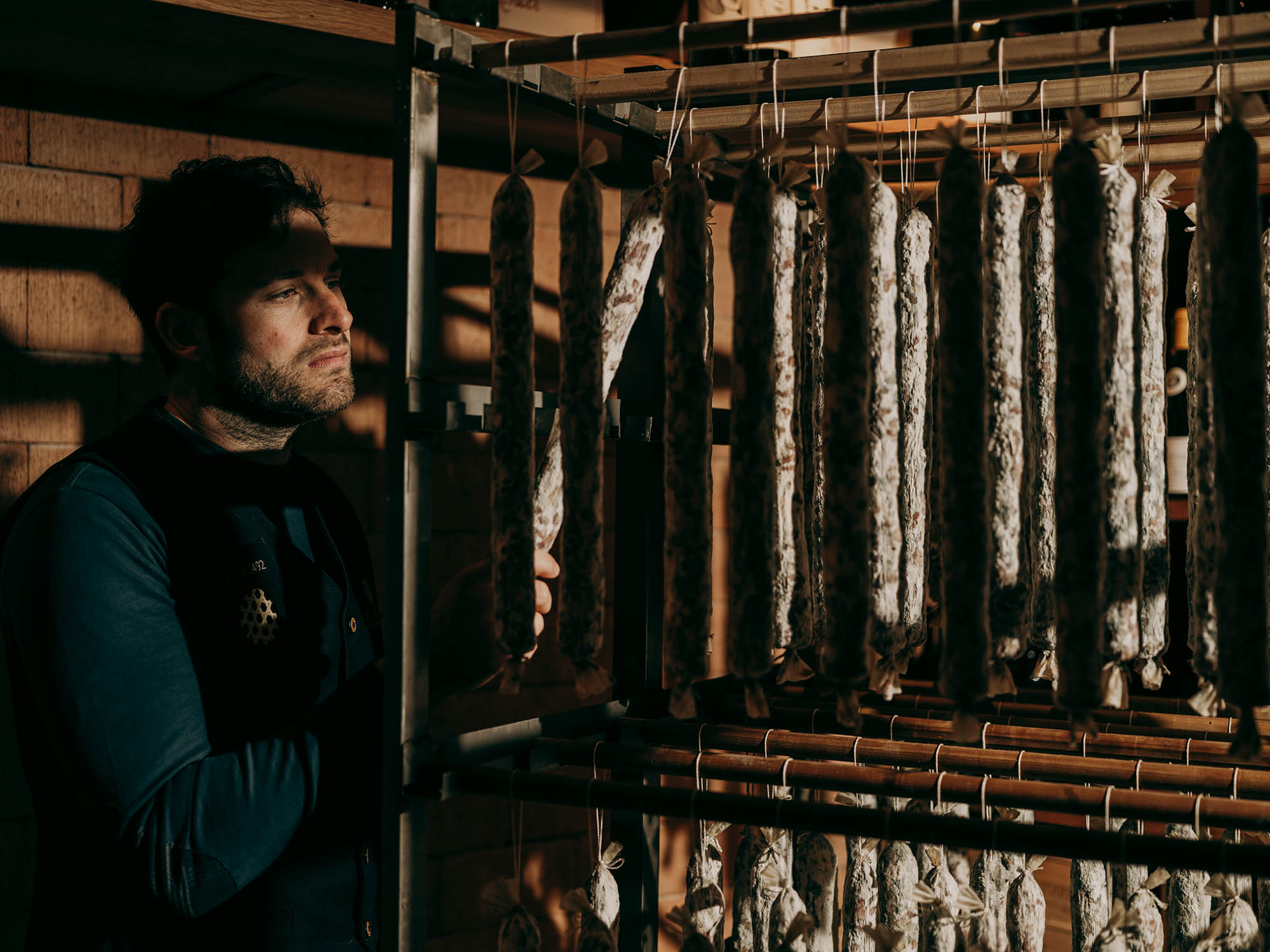 A man with big dreams

Lesar, this crazy Ribnica man with big dreams, succeeded in creating such a fine product from sausages and salamis, something so common, ordinary and profane that is desired by chefs and wine producers from Paris to Copenhagen, and from Bangkok to Vienna. With his BioSing brand, Lesar is a good example that to make it big one does not have to reinvent the wheel, but must look into the past, into one’s roots and tradition and build on those.

In the case of BioSing, these were Ribnica pedlars who took dry sausages on their first trade journeys. At the time, these did not contain additives or preservatives, and that is also observed by BioSing, which in addition to its logo boasts the “Since 1492” label.

Salami as a medicine?

You will be left flabbergasted when Lesar starts opening drying chambers and explains how he installed a special pipe system for natural smoking from an old oven in the boiler room, and how he uses water from a nearby stream instead of gas, which he supplies and discharges in order to attain the almost impossibly high humidity at which salamis mature. With his concept, Lesar returned to salami its (meat) essence. “There are no additives here, no E numbers. Due to natural fermentation with indigenous microorganisms, the sausages contain a lot of probiotics and are an exceptionally complex and functional food. These products are so natural that they are actually no longer food but medicine,” he is convinced. “I returned the preparation from industrial production to the level of a handicraft art. That’s all,” Lesar explains his philosophy.

At a time when we desperately seek to reconnect with nature and pristine flavours, this is actually all that is needed.

Like the nearby Novak family who were the first in supporting his ventures to create completely pristine salamis with direct, meaty and unmasked flavours, Lesar also swears by the local organically bred indigenous Krškopolje pigs, which with their unsaturated fat serve as the basis for his products. For different varieties of his game salamis, he mixes pork with bear or venison meat.

Maturing according to lunar phases

He matures all of his meats himself, including pork whereby he strictly observes the lunar phases in order to drain as much water from the meat as possible. This procedure alone will sound outrageous to butchers and makers of classic salamis: to process first-class matured meat into something so common like salami or minced lard. Products for which second-class meat is usually used.

He also does not mince meat but cuts it into small cubes thus making the selection wider. Cutting is done by hand, and with the final preparation of the salami filling and minced lard, he goes strictly by the principle ‘less is more’. The BioSing products are characterised by their clean flavour, with no prevailing aromas of garlic or smoke. Only so much spices, pepper, wine and salt are added so that the meat is not overpowered.

Lesar is under no illusion that he could sell his products to anyone and change the palate of masses; palates which, after decades of tasting cured meat products enhanced with additives and nitrates, have become completely insusceptible to the details of pristine ingredients. His salamis have a distinct deep meaty, at times even fermented, flavour that is the result of maturing at more than 90-per-cent humidity, which enables noble mould to penetrate to the meat where enzymes with a crucial impact on maturing are released. 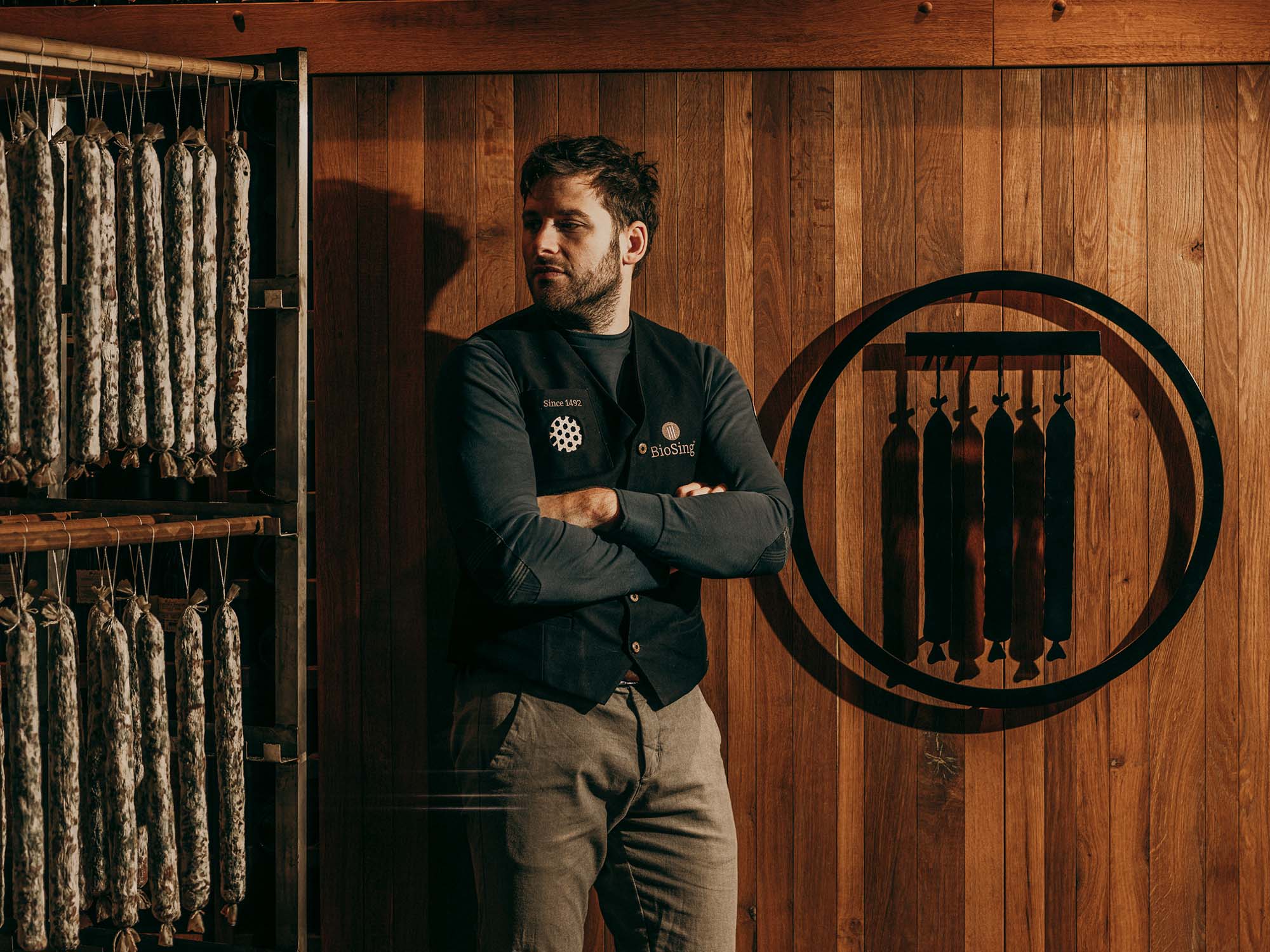 According to the type of product, meat is divided into chambers with clay walls to establish a microclimate system in them with natural ventilation and temperature regulation. In the ground under the chambers, clay pipes were laid from the boiler room where Lesar exclusively burns Ribnica woodenware from beechwood and in which the smoke cools down in order to preserve the esters giving the meat its sophisticated flavour. At the same time, the system enables the smoke to only brush up against the meat and not smoke it.

Lesar, a great lover of sustainable and organically produced wines, likes to compare his products with them. Just as biodynamic wine producers do not add sulphur, he does not add anything to stabilise his meat, so both of them are frequently walking the thin line between genius and unusable. Since one series does not fully resemble the other.

And that is why tasting at BioSing is not exactly … conventional. Lesar immediately explains that his salami is not for sandwiches and cold cuts, but is always served with carefully selected and well-considered wines, which further accentuate the meat. The ascent from the cellar leads to a wood-clad tasting room where the most expensive Zalto glasses and special wooden plates with grooves for maximum release of the aroma await, another one of Lesar’s inventions. 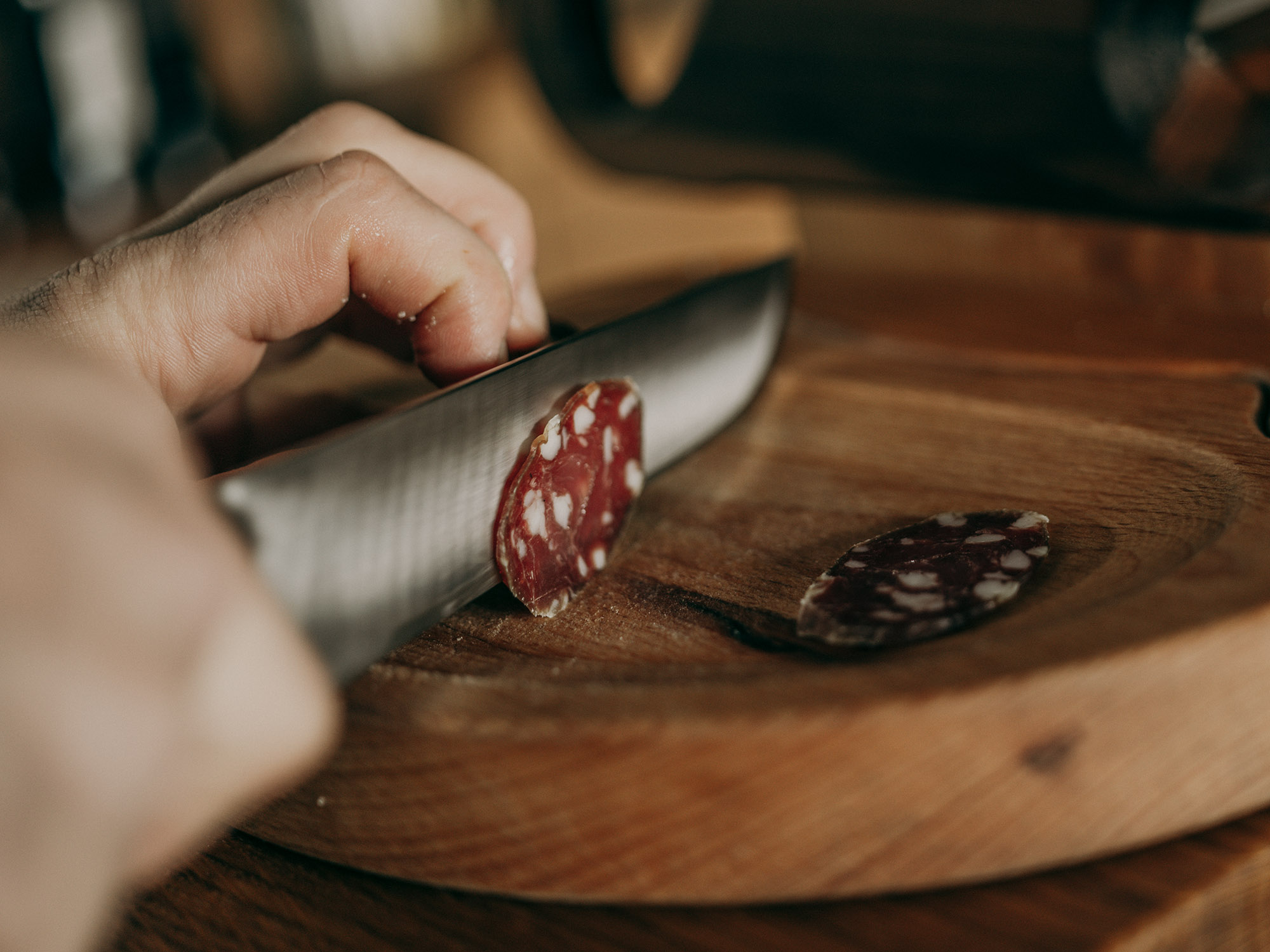 The grand finale is reserved only for those most open-minded for extremes, i.e. the G-line, composed of salamis matured for seven years. Like with wine, this very specific line is not produced every year and not from just any meat. If Lesar says for his other salamis that he never knows whether they will turn out fantastic or he will have to throw everything away and cry, the risk for the G-line is even greater. Walking on the edge. “Walking on the edge to get an aphrodisiac,” he laughs and pours a 13-year-old Negra by Joško Renčel from dried grapes of Teran, Merlot and Cabernet Sauvignon.

Lesar knows that he has created something special, something not known even abroad. But foreigners are more perceptive and he currently exports larger quantities to Italy, France, Austria and Germany. It would be fruitless to look for the BioSing products in shops and markets, all the best products are bought by the best Slovenian restaurants, from Hiša Franko, where the salamis have been exclusively served for breakfast since last year, to Hiša Denk, Repovž and TaBar.

Something is certain: the entrepreneurship spirit has certainly not died yet in Ribnica. 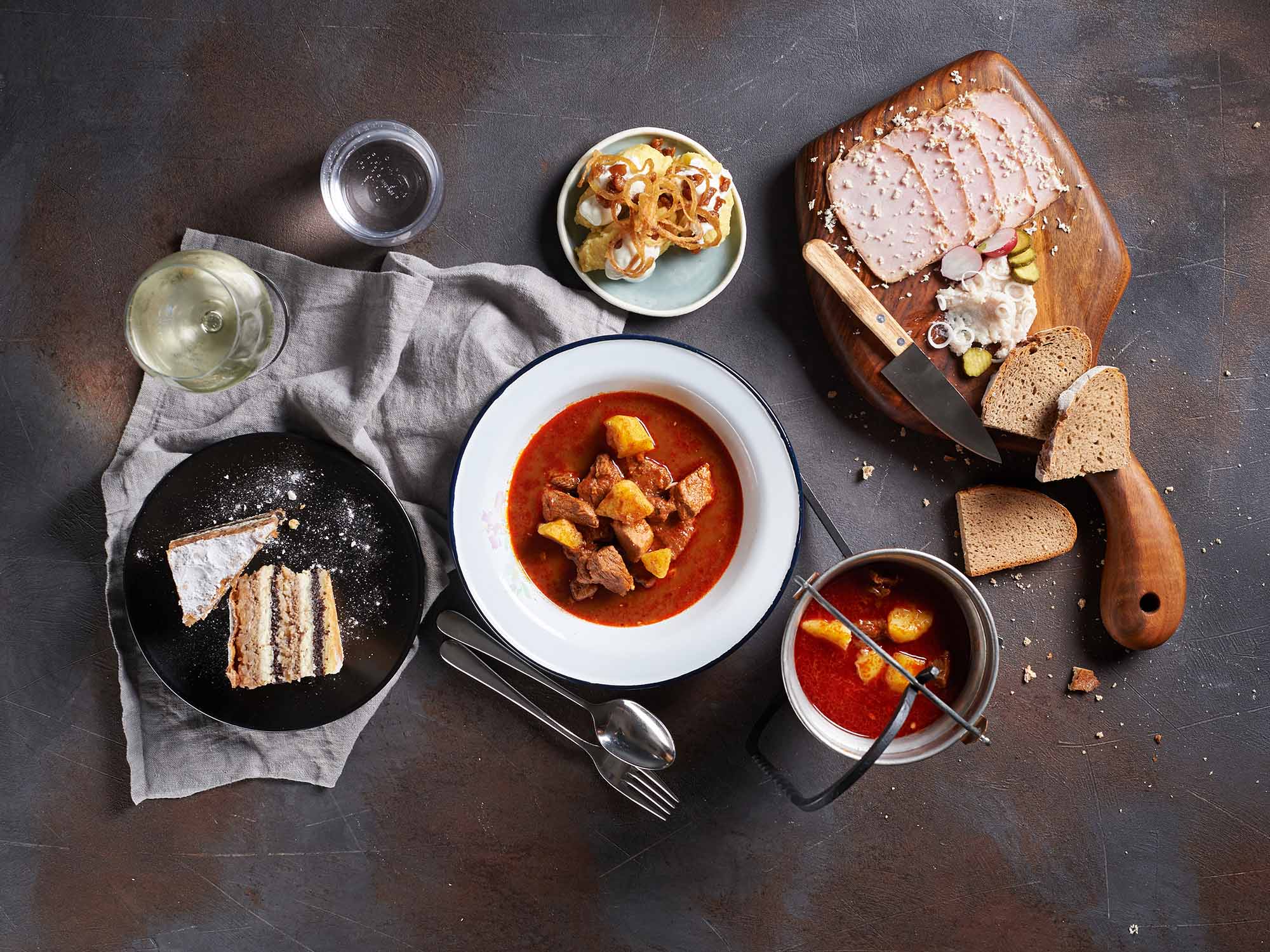 Discover flavours of Slovenian sustainable gastronomy from the Alps, the Mediterranean, the Karst, and the Pannonian Plane